Business Development Director Jeremy Bierer believes that our growing population, truth in sentencing laws and stalled capital investment to build new beds has resulted in “a pent up need for new space to be built”.

The need for state governments to re-ignite programs capital work programs and build more beds can be seen from analysing the annual Australian Productivity Commission reports on the design utilisation (or capacity) of correctional facilities in Australia.  ‘Prison utilisation’ is defined as the annual daily average prisoner population as a percentage of the number of single occupancy cells and designated beds in shared occupancy cells that is provided for in the design capacity of the prisons.

It is generally accepted that prisons require spare capacity to cater for the transfer of prisoners different security levels, and to manage short-term fluctuations in prisoner numbers. Percentages close to but not exceeding 100 per cent indicate better performance towards achieving efficient resource management. Percentages exceeding 100 per cent indicate over capacity.

In its annual report released in February, the Australian Productivity Commission recorded the national prison utilisation rate at 104.4%.

“This means that we have more people in correctional facilities than we have built beds for – it’s a safety concern for all workers, visitors, and detainees,” said Jeremy.

“We analysed the Australian Productivity Commission reports over a number of years and noted that the national utilisation rate at 104.4% not only represents overcapacity, but the rate has increased a massive 8.7% from last year”. 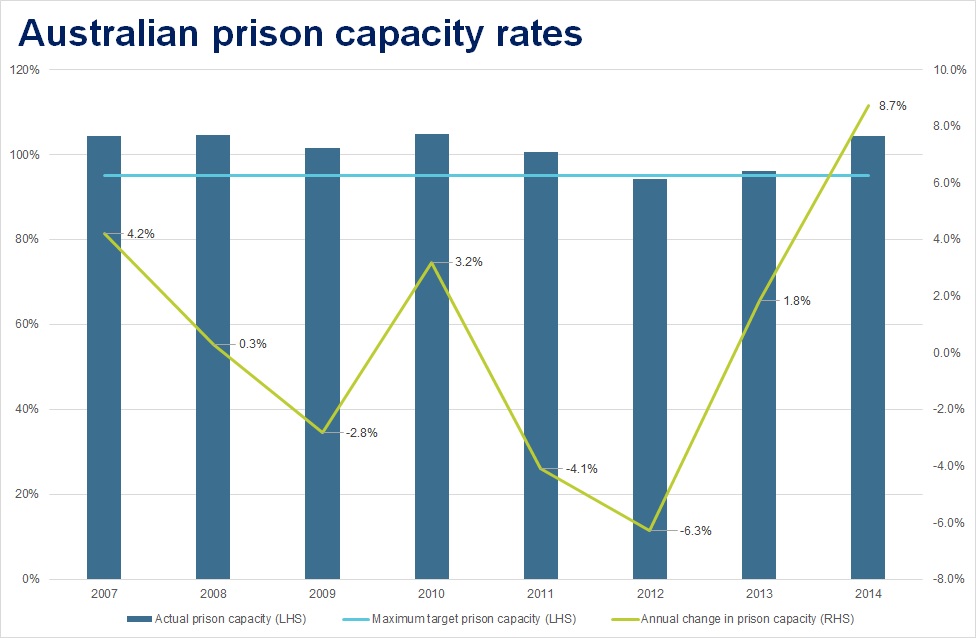 Over the past 12 months Woolacotts has been working with state governments to engineer modular cells that can be rapidly deployed to existing correctional facilities to help handle capacity issues.

“It’s not as simple as plonking a demountable unit into the corner of an existing prison,” said Operations Director and Principal Engineer, Stephen Branch.

“Correctional facilities are specialty buildings. While the demountable style accommodation is helping state governments with their short term needs, there is still a requirement for new purpose-built facilities.”

Correctional facilities are becoming more complex places. While imprisoning people has been part of human society since history was recorded, in recent decades there has been a renewed focus on rehabilitating offenders. The built environment is a big part of the rehabilitation processes.

The sector is also becoming increasingly attractive for more private capital to construct, maintain and operate correctional facilities for state governments in Australia.

“Private capital companies are investing for several decades – they talk to us as part of their due diligence because we are known specialists in structural, civil and hydraulic engineering design for correctional facilities,” said Jeremy.