Woolacotts contributed in a significant way to the concept design, authority approvals, detailed design and construction of the new Clarence Correctional Centre. This major facility with a construction budget of $700M has almost reached completion of the structural and civil engineering components. All buildings have now been roofed and enclosed, and almost all of the external works and pavements completed. 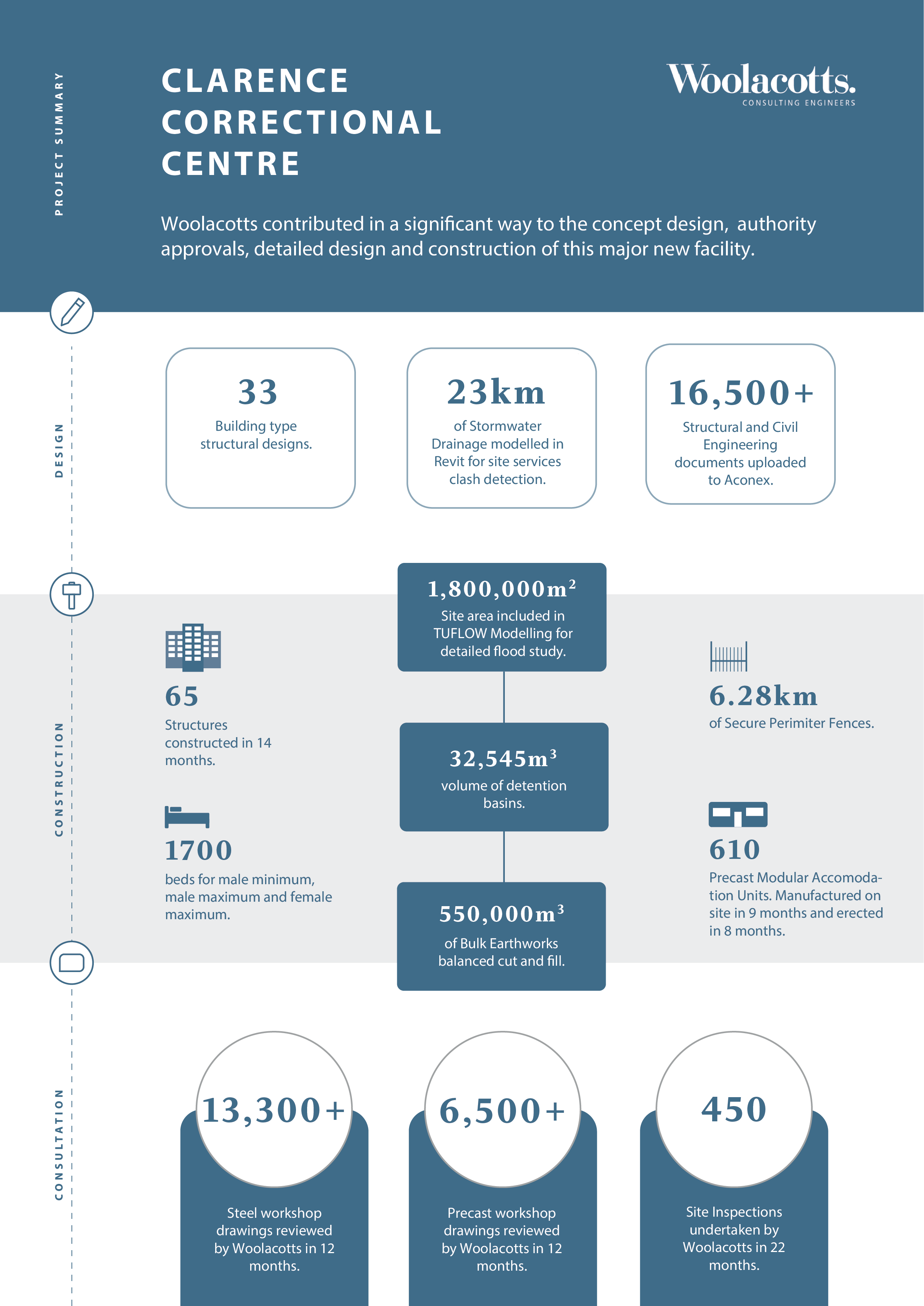 During an initial site inspection in March 2016, the Woolacotts team located the best position for the main entry roadway and identified significant landforms with natural watercourses which divide the site into natural flood free zones for development. This initial input, together with a painting purchased by Vince Pedavoli (Principal of Perumal Pedavoli Architects) led to the development of an overall concept design for Northern Pathways, and ultimately successful bid for the project. 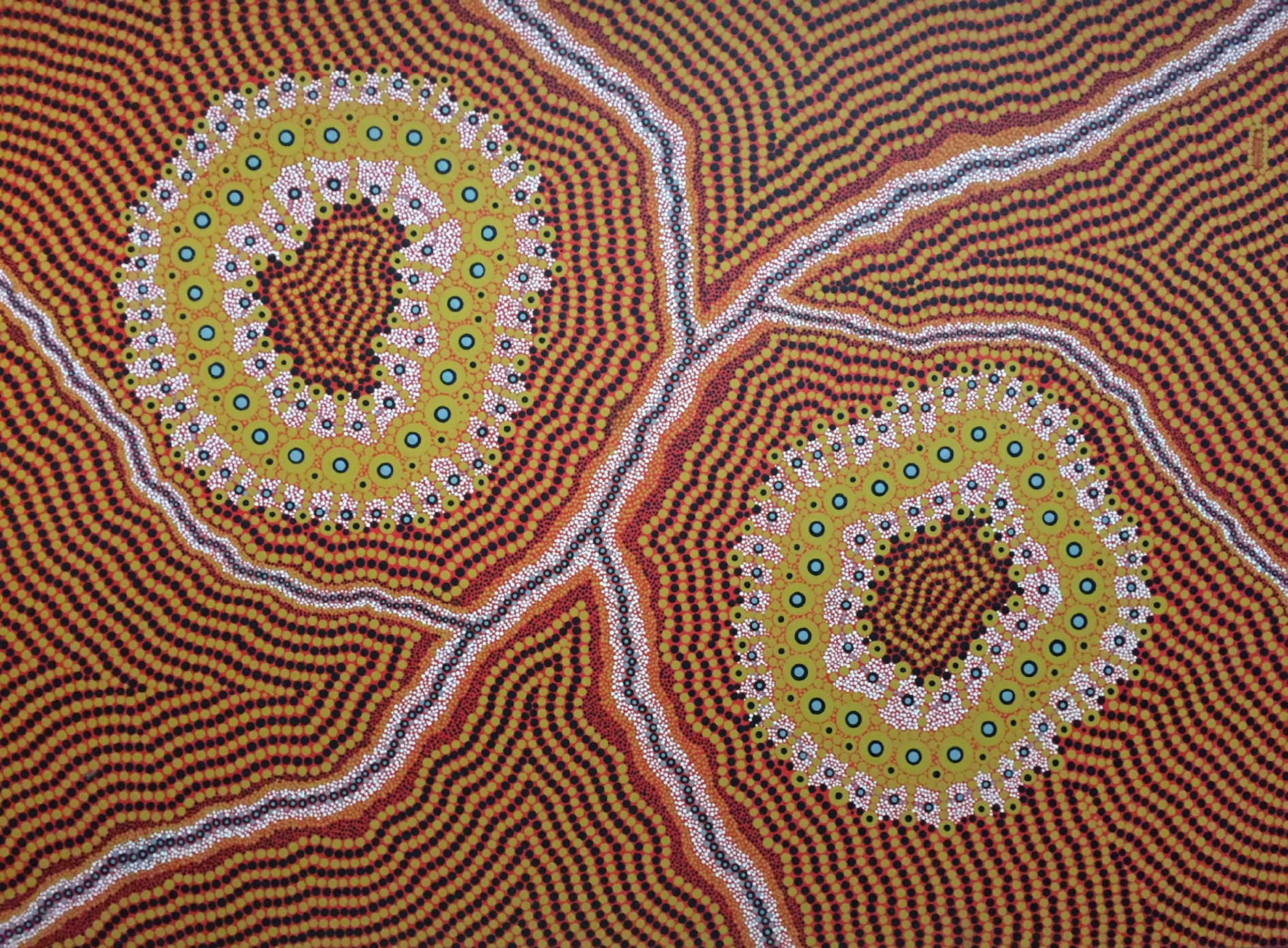 Featured above: Indigenous artwork by Anthony Flanders of the Dhangati people depicting land and watercourses in the Grafton region.

Woolacotts continued with detailed 3D civil engineering design to provide DDA accessible pathways to all buildings whilst minimising the amount of cut and fill required and ensuring all buildings remained outside of potential 100 year flood levels. Refer output from the finished surface model which morphs into the original landform. We estimate that our careful stepping of building platforms to match natural landforms saved approximately 300,000 cubic meters of cut and fill, minimising cost and maximising efficiency for the overall project. 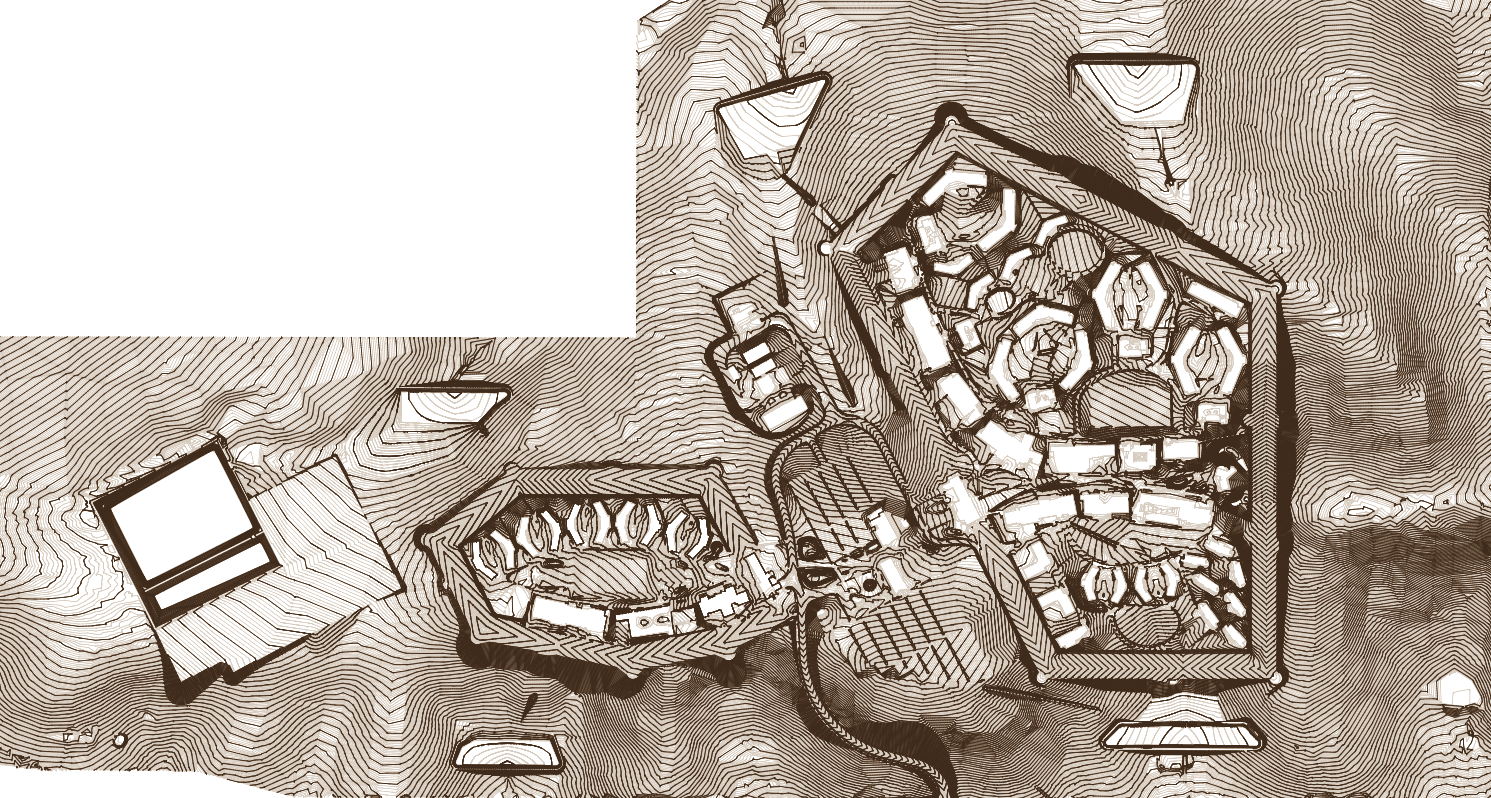 Featured above: Output from the finished surface model which morphs into the original landform.

The innovative use of five combined sediment control and on site detention basins on the outlets of the main watercourses from the site allowed the John Holland construction team to open up large areas of the site and undertake bulk earthworks without delay. These basins ultimately become part of the natural landscape and provide ongoing control of the rate and quality of stormwater discharge from the site.

Using our 40 years of experience in correctional centre design and construction Woolacotts with Perumal Pedavoli Architects pushed for the majority of buildings to be constructed using load bearing precast walls, with stability provided by structural steel horizontally braced roofs. This system maximises off-site production and has ultimately contributed to the construction of 65 enclosed buildings in only 14 months.

The use of modular cell units weighing up to 90 tonnes was expertise and intellectual property of the John Holland team. Woolacotts worked with John Holland and their specialist subcontractor to produce the final design and to overcome manufacturing and erection issues. The final product consists of secure and well detailed cells rapidly installed in 2 storey configurations throughout the facility.

Woolacotts, working with Northern Pathways and John Holland have assisted with other community projects around the Grafton area throughout the Clarence Correctional Centre project.

Ulmarra Public Pool was closed by the local council in 2018 due to the cost of maintenance. The local community have been campaigning to have the pool re-opened and received assurances from the State government that they will cover the operating costs of the pool for a period of time, as long as the pool was firstly repaired by the community. At the request of Northern Pathways, Woolacotts undertook a dilapidation report outlining the existing condition of the pool and gave recommendations on areas that required repairs.

To learn more about our experience in the Justice and Community Infrastructure sectors, including other correctional centre projects, visit our projects page, here.